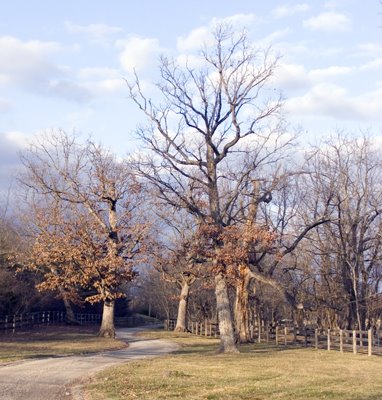 Let’s start with something simple. What makes this photo so appealing?

This comes from a recent January meet with the Nantucket-Treweryn Beagles in the Shenandoah Valley of northern Virginia. It’s a view of an interior road of a largish farm in a rural area. Despite the timeless air to the place, I know these oaks are less than 100 years old, and that the path probably intersects a public road not far from where it vanishes here, but none of that matters to how the picture registers with me.

There are formal elements that are pleasing — the straight lines of the fences contrasted to the winding line of the lane, the various vertical angles, the flat lane against the low hillocks in the distance, the proportions of sky to land. But I find I have projected personalities and narrative into the scene, and that is the foundation of its appeal to me.