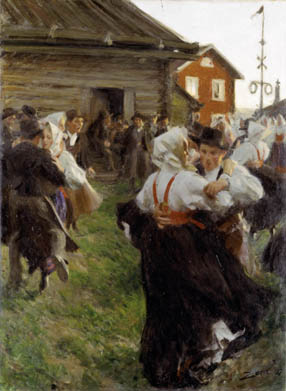 These days I play the fiddle.

It wasn’t always thus. I had classical piano training as a child, and taught myself guitar, both folk and classical, as a teenager. I can’t remember ever learning how to sing — I assumed everyone could (I still think that). My mother was trained as a classical pianist in Antwerp but she was diverted from that life by WWII and an American GI. She became interested in jazz theory when I was quite young, and I enjoyed learning what she was doing with basic music and harmony theory.

So there I was in my 30s, an experienced amateur singer in medieval-to-classical choral works and a variety of ethnic and traditional genres, and I still spoke string and keyboard a bit. Suddenly one day, listening to traditional Scandinavian multi-fiddle tunes, it occurred to me -– why couldn’t I do this? After all, how hard could it be? I got to the basic level of “village fiddler” after a while, and it’s all been a bonus from there.

Today, I play music for Scandinavian dancing. (I’ll speak more on that genre some other time, but if you like Irish music, I recommend the traditional fiddle music of Sweden, Norway, Finland, and Denmark.) What I want to talk about now is the psychology of playing the violin for this music, specifically how the physical movement of the playing impacts the overall communication.

I understood the principles of the strings and stops before I started, and I knew how the bow was used to produce the sound, but I was not prepared for the significance of the musical gestures imparted by bowing. Playing a guitar is an activity with small hand movements. But bowing… this is the land of big gestures.

For example, much of the dance music is in the form of “polska”, a dance with 3-beat measures, and the bowing is conventionally “down”, “up”, “down-up” for the 3 beats. One of the distinct characteristics of the Scandinavian polska is that the second beats are often asymmetric, varying by region or by dance type, or for expressive variation within the tune. So, not only might the second beat be “early”, you get there by “throwing” the bow up into the air early, and in some regional dances the dancers also rise on that beat, as if pushed up by the fiddler.

Think of the gesture of flinging up your arms in enthusiasm. Though your hands are constrained by the requirements of bow control, still the shoulders rise sympathetically, and the whole body follows, for the fiddler as well as the dancers. There is a complete alignment of this particular gesture of dramatic pleasure with the mechanical requirements of the performance.

Polska dances from other regions have different dialects. Sometimes the floating second beat with its up-bow is used for a different sort of emotional expression. In this example, the gesture is the shoulder lift and head tilt of regret or sympathy (“Oh, that’s too bad”).

In either case, there is the human gesture of a raised arm (and shoulders) and a head movement that expresses a different emotion, and the gesture can accommodate the mechanical needs of using an up-stroke to produce the notes.

On other instruments, the effect is muted (cello) or absent (voice), but on the violin it’s a perfect match. The “body English” that goes into a passionate piano performance is expressive, certainly, but it lacks the specific gestural mimicry and can only emulate, in timing and volume, what comes naturally in our physical modes of communication. For these fiddle tunes, it’s as though you wave your hands in the air and somehow the emotion embodied in the gesture is communicated through the music. It’s magic.