This group of mostly juniors obligingly clumped up in ascending height order, not so much their own height but that of their mounts.  That allowed me, despite the disadvantage of standing on the ground, to see several ranks in and capture the depth of the cluster.

Opening meets bring out all kinds of car-followers.  Here they sorted themselves into different tiers, and the loose woods behind them had enough interest that I could make the picture taller than this sort of lateral scene typically suits.

It can be a challenge to capture the scale of landscape in foxhunting scenes.  Here, where the Blue Ridge is constantly in the background, how do you show the size and weight of a mountain in a little square of a photo, especially at a significant telephoto distance where flattening is the main effect?

In this case the land fell away from a local hilltop leaving the subjects in focus, but creating an obviously much more distant backdrop behind them.  Letting the Blue Ridge fill almost the whole vertical wall behind that made it part of the scene.  The light illuminating the subjects helped with the theatrics of the setting.

A sudden difference in focus between subjects and backdrops, possible when there is a large gap, increases the 3-dimensionality of the image on the left.  The white barn is quite some distance behind the well-lit pack.

You can use successive shots with cropping changes for a completely different way to convey distance.

For example, in these 4 shots of the oncoming pack, not only are they getting closer, but I am also cropping them tighter with each shot; this has the effect of accelerating their approach. 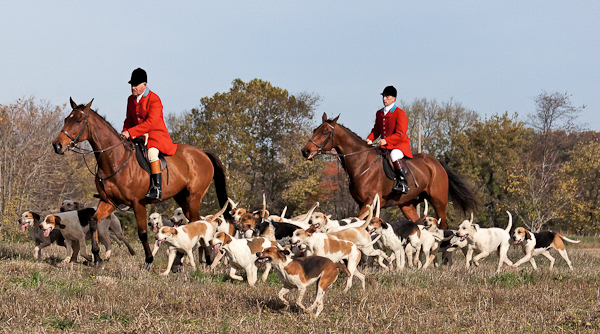 This article is cross-posted from KLM Images.